This is the uthrow combo guide for Falco.  For a full explanation of the reasoning behind these tables and flowcharts, read the Fox post. 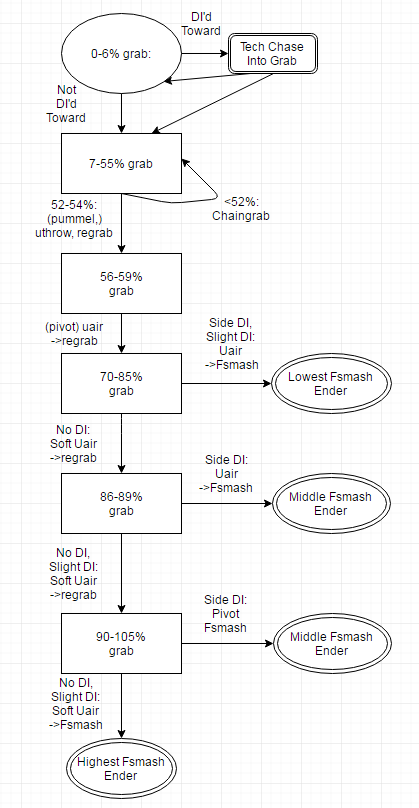 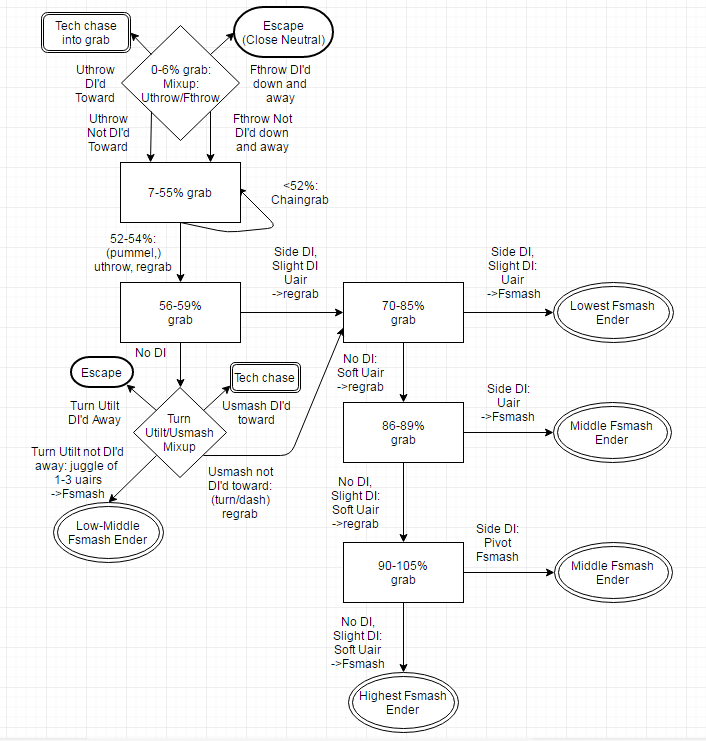 The combo strategy for Falco is almost identical to Fox's.  Even though the percent ranges for Falco are about 5-6% higher than Fox's up until 80%, where the ranges start expanding further, the flow of the combo is the same except for at low percents.  The chaingrab on Falco is harder due to the fall speed and how early you must begin dash grabbing side DI (14%).  Even though everyone knows that Falco can escape the chaingrab at 0% by DIing toward, I suggest uthrowing anyway instead of the standard fthrow/uthrow mixup, because as long as you're confident in your reaction tech chase, it should result in another grab anyway.  Another difference is that the Up-B/Nair mixup at 90-105% is not available to you, since up-B stops being possible on side-DI at around the same percent as Fox (94%).  Just learn to pivot Fsmash, it's worth it.

The biggest difference is in the higher percent combo table cells, where Falco may be wavedash/pivot Fsmashed on side DI up to around 110, much higher than Fox (~94).  On no-DI, Falco has to fear a soft uair -> Fsmash up to 105 and up-B up to 145!

Longer juggles seem more viable against Falco than Fox.  Falco's range at which you can get a good juggle is wider, 65-80% is the analog to Fox's 64-69% from my last post.  However, taking the guaranteed combo may also be stronger, as Falco benefits less from the height of the usual edgeguard you get from a well DI'd Fsmash, lacking the usable high up-B option of Fox.

That's about it.  The Falco combo is just different enough that you have to know the differences and practice against him separately.
Posted by Unknown at 10:24 AM